That Which Harsheth My Mellow: No GM

This is a mini-rant and an internal discussion happening in my brain. You are invited to join, respond, disagree, whatever. I may be wrong. I may be crazy. It's ok.

No GM? Are You Fucking Kidding Me?

I mean, who the fuck is supposed to stock the god damn dungeon? It's not gonna stock itself.

I have spent the last 6 or 7 years of my RPG life deeply involved in the OSR* as a creator of games, adventures, game zines, and as an artist contributing to a slew of OSR and other RPG products. But my first foray into any sort of organized RPG scene was at The Forge in 2000 where RPGs were being discussed as serious art. Pretentious? Sometimes. Opaque? Very. Important? Definitely.

I was enamored with the indie-RPGs movement and I contributed one idea to it that resonated. That was The Pool, and a subsequent follow-up called The Questing Beast. 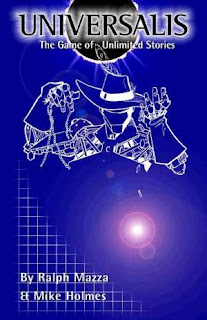 That movement lead to the questioning of every assumption about gaming. One of those assumptions was the role of a GM or the need for a Game Master at all. And that lead to RPGs without GMs. Now, the idea of fucking around with the GM role was not new. Ars Magica had a rotating GM concept (which I suppose could be ignored). I would argue that Amber Diceless (gods! diceless!) also fucked with the GM's role a bit because it encouraged so much creative participation from players. After that, The Pool was certainly a game that blurred the lines between the role of GM and the role of Player. From my memory, Universalis** was the first RPG that actually went into the deep end of the pool (pun!) and basically removed that line.

I ducked out of the scene by maybe 2002 or 2003. I was doing this zine called Random Order Comics and Games and my interest in creating/talking about games was waning. This wasn't because I was losing interest in games, but because I realized I am not a game theory guy. When it comes to gaming, I like drawing skulls and rolling crits. I don't enjoy dissecting and critiquing and reinventing. I enjoy making shit up and sometimes - sometimes - I make up something actually good. Other people are much better at the "jibber jabber what make with them talkie words"*** than me.

Fast forward. I do some webcomics. I get into D&D again and DCC RPG. I make Black Pudding. I start sideways-looking at story games stuff - a scene I had been a part of so long ago. Things had progressed since my departure. I noticed in some discussions, particularly on the Twitters, how the idea of a game with a GM was becoming antiquated, gauche, and crude. "I don't play any game with a GM" is a phrase you can definitely find in multiple and frequent conversations.

And that is why I wrote this rant. Because it touches a raw nerve. I'm absolutely in favor of expansion, progress, change, and evolution (good, bad, ugly). I am absolutely not in favor of snooty fucking snoots snooting down on shit they consider to be passe or trite or, heaven's to fuckin' Betsy, regressive. Donald Trump is regressive. The 700 Club is regressive. Steven Seagal is regressive. An RPG arranged with a GM and Player setup is not regressive. Neither is a guitar amp, a mechanical pencil, or a coffee bean grinder.

In short: we can do both/and.

Now, I don't want to sound like an asshole who doesn't want people to express their views. By all means, if you seriously do not like GM games and don't want to play them then that's perfectly fine. I'm not complaining about you. It's only when you take that a step further and say that GM games are repressive or they represent a toxic hierarchy that I have to call your bullshit. Such games can be toxic in the same way a Twitter discussion can be toxic. But they are not inherently so and I wouldn't even accept the claim that they are more likely to be so. (You mean a table of co-game runners can't be toxic shits?)

The thing is, I've never played a 100% GMless RPG. I'd like to try one, just haven't. But I have written and ran games and played in games where the line between the GM and the Players was a little blurry. And that's a lot of fun for me. These days I always include some kind of line-blurring in my game designs. GOZR, the project I'm currently "working" on, includes mechanics that are akin to The Pool in that they allow Players to have some input/agency toward facts about the game world. I love that shit.

Practically speaking, the OSR manifests as games and game products that are largely or completely compatible with older versions of D&D. People will argue about this fact, but that's what you see with boots on the ground. The higher philosophy of OSR is often stated as a gaming movement that seeks to emulate the feel of older games. And you will see OSR described as any playing of, love of, or riffing on any older games.

Also, by "deeply involved" I mean I've mostly been creating stuff within an OSR framework. I haven't been involved very much socially and since the OSR has a strong social element (as does gaming in general) I didn't want to suggest I've been neck-deep in Reddit threads or hanging out at the most popular OSR watering holes. I have not. I was very active on G+, but mostly posting my own content and commenting here and there. I do my thing, some people like it.

**Memory lane. I was approached to do the art for Universalis but at the time I was in a funk or something and I didn't want to draw for someone else. So I put the creators in touch with my friend David Hedgecock, an exceptional artist, and the rest is history.

***I have an obsession with footnotes. Comic books taught me this. Anyway, that's a quote from Squidbillies.
Posted by James V. West at 9:55 PM