I used these on the PCs in the first session of Lost Land of Zkoth. They faced 6 panthers in a foliage-dense area in daylight. One of the PCs had a magic eye that allowed him to see the creatures, so there was no surprise roll. They also had a lot of retainers and a couple of beefy NPCs, so I probably should have chucked a lot more panthers at them.

Still, one PC was voided from his left hand all the way to the neck, barely avoiding the torso and head. He yet lives, so don't get out the tissues.

I think these summoned beasts are utilized by the primary enemies of the campaign... a race of strange people from a world far away. They haven't made an appearance yet. I figure more void panthers are on the horizon. 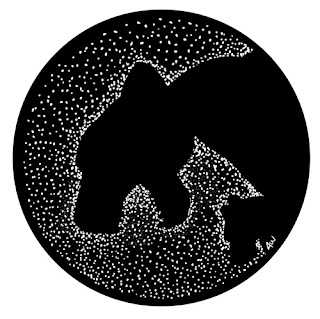 Negative space, black as the cosmos, takes panther shape in these sinister summoned predators. No light plays off their form, no glittering eyes or shining teeth - only blackness. They form a pack and hunt their quarry with pack coordination, preferring open landscapes where they can surround or divide the enemy. Moving with great speed and silence, they surprise on 1-3 in 6 in daylight or 1-5 in 6 at night or in darkness. They are able to hide in shadows or darkness with perfect skill, becoming visible only when attacking.

Non-magical weapons hitting a void panther will vanish after dealing damage. A Light spell cast directly upon a panther will destroy it. If the spell is cast in the area, the creatures will suffer 1d6 points of damage, but they will not suffer damage from simply entering a lighted area.

If the creature's attack is successful, the target must save vs. Spells or else the body part that was struck takes on the blackness of the void and cannot be used. Each combat round thereafter, the PC must save vs. Spells or the void spreads to the next adjacent body part. If the chest or head are voided, the PC must save vs. Death or instantly die. Passing any of these saving throws negates the panther's magic and returns the affected body parts to normal. A voided body part is like a ghost and cannot physically interact with the world.

To determine which body part is hit, roll on the table.