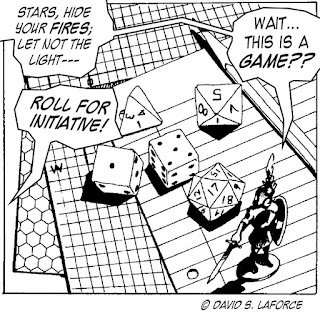 I have a lot of random RPG thoughts, most of which are forgotten within minutes and never uttered. Maybe I should make a stronger effort to jot them down. Trouble is most of them are lame.

I was thinking today about the idea that all monsters and all magic in fantasy games should be unique. It's a fine thought. But there is a pretty good counterargument, with regard to playing D&D in particular.

D&D is a game. Specifically, it's a game of exploration, risk, and the accumulation of wealth and power. Reading the rules to the 1981 Basic/Expert game, you are given a clear and concise set of rules for playing the game exactly in that way. And nothing more. It is a game.

One element of playing this game, for a lot of players I think, is that they can learn the game's "playing pieces" and navigate its rules to be better at D&D. When a game is framed squarely as a game, this makes perfect sense. If I have encountered a basilisk before, in another adventure with a different character, then my player knowledge about the creature's gaze attack is a piece of the game I know and understand... why should I not move my new playing piece (PC) in such a way as to avoid the known gaze threat? I'm playing the damn game, right? And this, for me, might be boatloads of helling fun. I'm winning!

Of course this is just one play style and it is extremely focused on the "game" part of "role-playing game". I'm not advocating it as a default style of play or a preferred one. When I play I tend to try to be "in character" in the sense that I move my playing piece in a way that my playing piece would move rather than how I, from a godlike vantage point, would suggest that the PC moves.

I'm quite confident all of this has already been fully explored on a number of blogs and websites. I know it was a hot topic back in the early 2000s at The Forge. I just wasn't paying that much attention. I'm usually 10 years behind the curve, to be honest.
Posted by James V. West at 10:28 PM