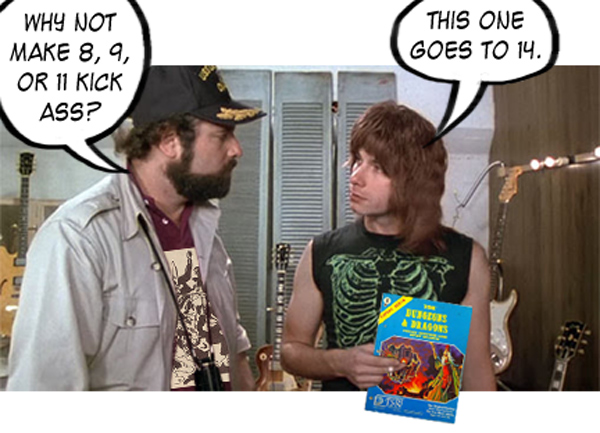 As you might have noticed... I have some B/X D&D on the brain these days. I was worried... for a time in recent months I simply did not have it on the brain. Burnout? Probably not. I don't really "burnout" on something. I get distracted.

OD&D is a beast with which I am familiar only through the osmosis of reading blogs, FB posts, Twitter, and listening to a bazillion podcasts about the OSR. I understand what it is, I know it's rules, generally, but I'm unfamiliar with it intimately and have no nostalgia for it. I never knew much about its existence until much later in life, to be honest. No one I knew who was into gaming back in the 80s ever mentioned it or owned it.

What I did have intimate experience with was B/X, BECMI, 1e, and 2e. That's my era, due to the age at which I bought my ticket to ride (13-14). The first one I played was B/X. The first I owned was Red Box. It was all glorious, of course.

Peeking into OD&D I can see that Fighting Men were given levels through 9, Magic-Users through 11, and Clerics through 8. I don't believe there was any sort of level cap or anything, it's just that they only included those levels. Those books are a shit show of organization - a beautiful shit show, of course. I am an old school zine kind of guy so you would think that I'd be all over OD&D's gritty photocopier aesthetic. And I do admire it! But it's not my D&D so it's hard to get a boner about it.

Add to that the fact that even though B/X is far better organized, cleaned up, and codified it is still a fairly crude book by today's standards, right? Who the fuck uses that garish Souvenir font anymore?? (hint: I do).

So what was my point here? Oh yeah... this one goes to 14. And I think that's super important.

Going to level 10ish is fine. Going to 18 or 20 (AD&D's range, from what I remember, and the range of 5e) is fine and dandy too. Going to 36 is BONKERS. What was Frank Mentzer thinking? (well, the 36 level range had already been promised so it wasn't his idea... he was just fulfilling it.)

14 levels is basically perfect. You have your sweet spot at lower levels, some access to real power, and a nice place to say "We've done it. Let's roll up some new level 1s."

There are other reasons, though. It's hard to hold 20 levels in your brain. What does 14 mean in the context of 20? But 14 fits nicely. I know that getting past 7 means you're a big fuckin' deal. Getting to 14 means you're a god damn existential threat. After all, even though 7th level spells aren't in B/X (and maybe they fucking should be), given the logic of the Magic-User's XP table, they should be slinging 7th level spells at level 13. Mass Invisibility... Charm Plants... bring it.