Zebu: Reek of the Parvenu

It's my blog and I'll cry if I want to. So I'm a gonna post some music albums here and there. Note that this is not a "review" series, at least not in siprit. I'm just posting shit I found that I have some reason to talk about. Very very often it will be because the album cover art caught my eye.

This one is part of the Chicks on the Cover series. I think that is self-explanatory, isn't it? Come for the cover, stay for the tunes?

Zebu: Reek of the Parvenu

This is a really good Greek metal band. If you like the band Death, this will appeal to you, I think. Mostly because the vocals are similar. But this is a solid band with a heavy doom sound that doesn't fall into the overtly Black Sabbath end of the spectrum. The riffs aren't boring.

There's a backing vocalist on one track who I could have swore was Michela D'Orlando from Power Symphony, but turns out is really Katerina Kostarelou from Bacchus Priest. There's a deep cut for your ass.

The cover is by Mike S. Putrefurnaced and it depicts a witchy looking woman with lovely blue hair being hauled down by little ghosts or faeries or something. Epic! 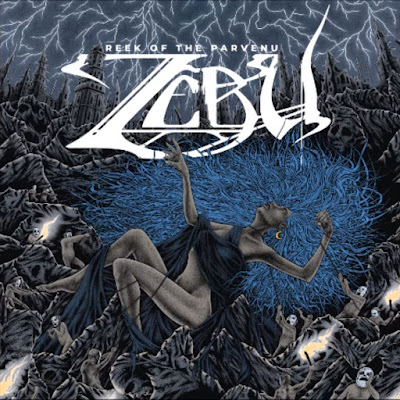