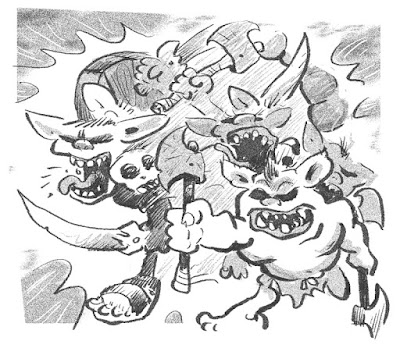 I have had my moments when I fought hard against fantasy tropes. Back in 1990, when I was a year out of high school, I decided "no more elves, dwarves, and dragons". I switched to GURPS and ran a campaign in my world of Midaka. It had its moments and was fun, but ultimately flopped out and was never finished. Mostly because I am just not a big GURPS fan, as it turns out.

But that's such an aside and not the point here.

The point here is that I do love certain fantasy tropes and lean into them pretty hard with my D&D. Dragons are not one of them. I just never got into them. But goblins... now I love me some gobbos.

I did a goblin character class for Black Pudding: 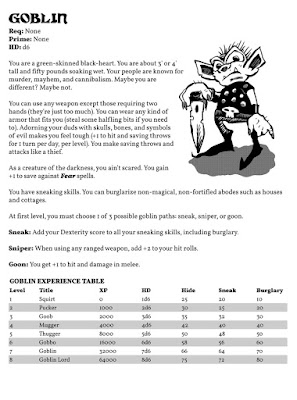 In my campaign world of Yria, goblins are born from rot. Wherever food or carcasses lay to decompose, there is a chance that goblins with emerge. They are green, generally, and foul. They eat their own. They have no manners or sense of moral shame. Their culture, such as it is, arises from certain ancient curses that caused them to be spawned from rot in the first place.

Goblins can be good. Mainly because I don't use alignment in my games, typically, and I figure if you want a kindly gobbo you can certainly have one.

Goblins use whatever weapons and armor they can get their greasy little fingers on. They are naturally skilled at working together to bring down enemies, favoring the setting of nasty traps and flat-out bum-rushing foes in a cluster of green. Their wills are quite weak, so they are easy targets for powerful leaders such as wizards to rally them into service. If a goblin believes they are fighting for a higher cause - almost any cause - they will fight harder for it. They enjoy being told what to do and complaining about it later.

A similar monster, the nasty ork, is born from the same primordial curses. But orks are spawned from wherever a demon or devil or other infernal hell creature steps or spreads its spore. Thus they are rarer, bigger, and more wicked. While a goblin's desires lie in eating and sleeping, mostly, an ork's chief desire is to hurt others. Orks also have weak wills and fall easily under the yoke of more powerful creatures.

I say all this because I've been thinking about writing up my campaign setting in a series of zines (little books, whatever) so I can have them in print. It would sure help me organize and not contradict myself at the gaming table. "Now... what was it I said about orks and imps? Oh, let me check the book."