HOW DID YOU GET INTO GAMING?

It was 1984, I was 13. I had a crush on my math teacher, Mrs. Kendall. She was a short, plump woman with chubby red cheeks and an overbite. She had these delicious black rimmed glasses and wore simple dresses. But they were snug enough that her ample curves couldn't help showing through. I was 13. I noticed this shit.

Anyway. Um... one day after class I stopped to chat her up, like you do at that age. I was putting on my moves, talking about Conan comics and she clearly wasn't into it. She was rushing me. Time to leave. I got the message eventually and left the room with a cool swagger, pushing up my glasses to show solidarity.

In the hall was my buddy Sam talking to this tall dude I saw around but didn't know. His name was David and he had in his hand a thick biology book that contained no references to evolution and this other book with the fucking weirdest looking creatures on the cover I had ever seen. Title said "Monster Manual". It was some next level strange bullshit. He also had this little blue ball in his hand... like tiny. Like a toy. Kept saying it was a "20 sided die", which sounded like complete nonsense to me.

Well, turns out that book was for this weird board game without a board called Dungeons & Dragons. He was looking for some players and Sam was volunteering us to join the game. As it turns out, I remembered Mrs. Kendall one time talk about a game like this where you used numbers to represent character traits. Like you'd have a strength score or something. She seemed to think it was a useful math tool or some shit, so I was like in my head going "This could be my way in" so I was like "Yeah man, let's play."

So we did. I played a character (you make up characters) called Beano the Cheesey Wizard. David, who was the MC of the event, didn't seem to love that name but he was like "whatever, just roll for initiative". Beano was kind of a skinny, weak, silly asshole who wore a fedora and carried a big sword. Now... here's the thing about the game. Wizards couldn't use swords. David said I couldn't have a sword and I said the price list says 15 gold pieces and I have 48 so unless the shopkeeper shoots me, I'm buying a fucking sword.

I got the sword, but wasn't allowed to use it. I know, it's fucking stupid. But the rule book says I can only use a dagger, dart, or staff. I mean, in the words of Lars Ulrich, "they don't actually put anything there to stop you, like spikes"*. So I carried that fuckin' sword and made a point of threatening people with it as often as possible. But the MC was stubborn and would not let me use it. I played this up. "Beano tries to draw his sword but some invisible force stops his hand. He struggles against it... clenching teeth and pushing at the force but to no avail! Frustrated, he casts Magic Missile instead."

Beano was killed by kobolds who laid a pit trap. Poor bastard fell in, taking 6 damage... 4 more than his hit point total. Then a kobold shot him with an arrow for 6 more and he was at -10. Apparently, according to the MC, -10 is a big deal. I said "Look, I'm fine with Beano being dead. I'll roll up a dwarf named Cormac Mac Daddy. But if this shit doesn't get me to second base with Wanda Kendall I'm telling people you shave your nads."

David lit a cigarette at that point. Not uncommon back then. He was older, maybe 17. I remember Toto playing in the background when he looked at me and said "That might play well with my rep.". Someone, I think Jesse, knocked over a can of Dr. Check at that point, spilling it on the Monster Manual. Not sure what happened next, but it's not important. I did score that copy of the Manual from David later that year by trading issue 107 of Savage Sword of Conan. I didn't mind the Dr. Check stains, but it pissed me off that pages 17 and 18 were stuck together. Seriously, David? What the actual fuck.

When I relayed the story of Beano to Mrs. Kendall she smiled, nodded, and said "Ten foot pole could have found the pit trap." I believe the "ten foot" comment was a phallic suggestion, honestly. And, if I'm being straight, it kind of put me off a little. Like... what was she suggesting anyway? Feeling incredibly self-conscious, I stopped making moves on her and kept our potential affair to myself for private time. "Tow the line, love isn't always on time", right? But I still kept playing in David's D&D game. Cormac made level 3 before succumbing to a roper's grasp. His sister, Fanny Doodle Mac Daddy, inherited his +1 war hammer and lived on to see level 9.

That is the truth, I swear it. Every detail.

*He was talking about driving between the lines. 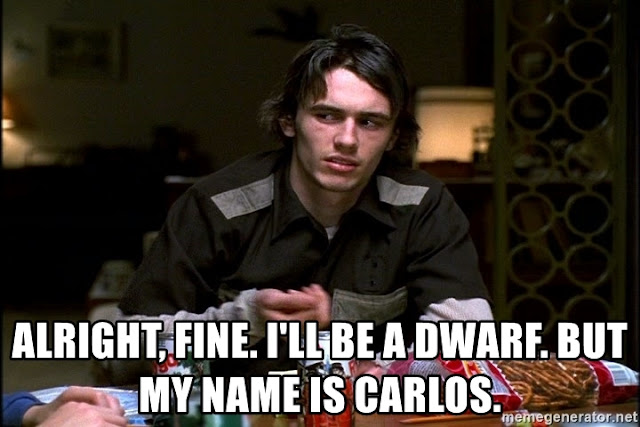