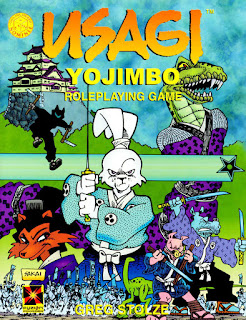 I have spent most of the last week digging deeply into this 98 page game book and trying to grokk the rules. I do not have a background with Hero System or Cyberpunk (I played one game of Cyberpunk in 1989), so this is all new to me. I have owned Usagi Yojimbo RPG (UY from here on) for 15+ years, so I have read it before, in chunks. I have studied it to some degree. It is a simple system and I dig it.

But this game has issues. It is delightfully focused on Usagi material and feels like it will be a breeze to play. But it does suffer from some fairly significant layout and design flaws, in my opinion. I'll address one of them in this post.

There is a one-sheet breakdown of the entire Instant Fuzion (IF from here on) system on page 11 of the book. Under Actions it says a Hero can Dodge. By Dodging, they can't attack that phase* and they get +3 to Evasion. But the combat rules in UY simply say that when it's your turn in a fight you choose Total Attack, Cautious Attack, or you hold your action. When you are attacked, you can choose Total Defense. These actions are called the Three Strategies. There is no mention of Dodging.

Likewise, the IF rules do not mention the Three Strategies.

So reading between the lines, I assume the Three Strategies was an add-on by the author, Greg Stolze, to better simulate Usagi-style fights. When he wrote the rules for it he did not integrate IF rules into the text. So you have essentially two separate documents that can each stand alone. Which do you use? Both, either?

Here's the thing. They do not contradict each other regarding Dodging. So if I tell my players we're using the Three Strategies, not IF, then I'm cheating them out of the benefit of Dodging. And since Dodging doesn't contradict the Strategies I don't have much of a reason to do that. I want them to have that option. So I'm forced to say the combat rules are on page 11, but also there's the Three Strategies on page 43 and you need both in order to carry out a fight.

Bad design! Why aren't these things integrated? It feels like Stolze was asked to use IF as a base then he added things to it and just kind of let them be separate.

I did read somewhere that the Three Strategies were really intended for swordfights only. But that's not true because it literally says "Here's how fights happen in this game." and the examples listed do not limit themselves to swordfights.

My solution? I'm going to integrate these rules myself in a document for my players.

Also, if this plays well, I might just hack the shit out of UY RPG and make a new game. Why not? Seems like fun. Rabbits & Rangers deluxe?

*Regarding Phases... I will make a different post about that. But I'm not planning to use phases, only rounds. I don't see the benefit of phases in this game. More on that later.