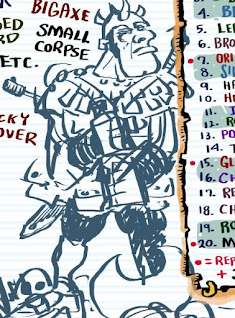 GOZR is an adventure RPG. You roll up a random gooz and go an adventure in a fantasy world at the end of its life. When the world will end is not known, nor is it necessarily part of the game like it is in Mörk Borg. But there are going to be negative things happening due to the end times a comin', thus there is incentive for PCs to seek out a way to stave off the end and heal the earth.

(As I write this, I realize I need to give this bit some more thought. So far in the pages I've created there is next to no discussion of the end of the world. But everything I've created so far is related to character creation and mechanics, so there's still plenty of room to explore the idea.)

Here are some of the game mechanics.

Action Classes: The history of this game design lies in Dead Wizards, back when I had the idea of embracing the old D&D attack matrix as a core game mechanic. I came up with three categories of action and was planning to have them represented on the character sheet as a descending AC matrix. I killed the matrix but kept the three action categories, which I call Action Classes, or ACs (nods). These are your stats. They are Cunning (stealth, charm, skill, cleverness), Prowess (physical action, combat, danger stuff), and Magic (intellect, knowledge, arcana).

I went with these three categories because, per this game's lineage, the idea was to evoke sword and sorcery. And when I thought very hard about how my favorite sword and sorcery characters interacted with the world it was in these three ways, primarily. You don't really need anything else to play this game.

Each AC is a target number, which is generated randomly. When you do an action related to that AC, you roll 1d20 vs. that target. There are very few modifiers and the ACs rarely change. Instead of your ACs getting better predictably, you have randomized and organic character development. Maybe you are blessed by some forgotten deity and your Magic AC is improved by 1, or maybe you find a weird alien device and your Cunning gets a little better when you're using it. Etc.

GOOZ: Every gooz has GOOZ. GOOZ is the spirit of the people, your connection to the Powers-That-Be. GOOZ is a pool of points you can spend to do cool shit. Right now the cool shit list is this:
So basically GOOZ is your pool of luck or fate points, which no self-respecting adventure game should be without.
Talents: Every gooz PC gets a random power. I have a list of 20, but I'm planning to have alternate lists so there are a lot more of them. Powers include things like having a third arm, a third eye, magical luck, toughness, education, cuteness, psionics, etc. I'm thinking that while very gooz PC has at least one Talent, only about 1 in 6 gooz NPCs have a Talent.
Doing stuff: Pretty simple. Mostly you're going to roll 1d20 vs. your AC. The mods will be low and rare, with the most common being Lucky. If you're Lucky in that type of action, you get +2. Luck stacks, so if you end up gaining Luck on an action for which you are already Lucky, you get another +1. And the opposite is true for being Unlucky.
For this mechanic, I was originally going with Advantage/Disadvantage. But I feel like that clever mechanic, which I do love, has been used to death. Plus it doesn't stack as well. You can have double Advantage and roll 3 dice, but most games don't actually allow that for some reason. Anyway, I'll be avoiding Adv/Dis for GOZR.
Death and junk: I'm using Hit Points. I tried to think of other ways to do this, but to be totally honest I really like the simplicity and utility of HP so I'm sticking with it. When you run out of HP, you choose between Death and Debasement. If Death, you roll on a table or pick a little boon toward your next PC. If Debasement, you roll on a table to see how your PC gets fucked up... but lives. Nothing good comes from Debasement, so dying over and over will inevitably lead to a wrecked character. Which sounds like a hell of a good time to me!

I'm considering an additional mechanic that functions like a saving throw. I am really on the fence about it. Basically it's like the Sand mechanic from Sand in the Bone (these two games share like 90% of their DNA in terms of mechanics). You would roll 1d6 with a target of 6+. You'd add your current GOOZ to the roll. So if you have 4 or 5 GOOZ, you're more likely to succeed. If you've spent it all, you're not. What I like about this idea is that it's another mechanic to utilize, and I'm a fan of games with a few sub-systems to break up the fatigue of rolling the same thing over and over. However, this method does penalize you for using GOOZ... and that is not what I want. I want you to spend the GOOZ and do cool shit. So I'm leaning toward not using this.
I could keep it and just say you can spend only 1 GOOZ to boost the roll. Maybe then the target is 4+ so it's a 50/50 shot. This would be totally a luck/fate mechanic. Kind of a pass/fail, do/die thing. But I'm really not sure about it so right now it's not part of the game. Just an idea.
Um... what else? Random weapons, armor soaks damage, crits and fumbles are a thing (because FUCK YES), and the whole god damn book is table heavy.
Target for this thing is 24-32 pages. It will be a complete game and hopefully will include an adventure or an adventure generating thingie. Beyond that, if I'm still feeling it, I'd love to do a follow-up book of nothing but alternate random chargen tables, and maybe other follow up books to boot.
In the end, this is a labor of love and a project that is all about inspiration. Of course  I want it to play well, but honestly rolling 1d20 + mods vs. a target number is quite well understood and I'm not too worried about running into serious "balance" issues. Playtesting should hopefully reveal any serious flaws.
But let's not get ahead of ourselves. Still a lot of work to do on this bad boy right here. I'll keep you posted. 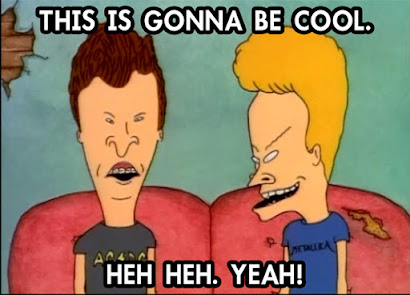