An RPG Folder You Once Smooched

Another chapter in this unfolding story.

How this works, for the record: I open random PDFs (I usually close my eyes and click) in my gaming folders and I snip the title, then I give a very quick, short, off the cuff response to what I see. Usually this means I haven't read the thing completely if at all. Sometimes I dive deeper, sometimes I just say a sentence or two.

So here goes another batch. 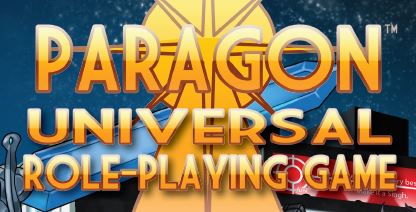 Not that this is a supers game. It's universal. But that cover art by Adrian Reece (which is a bit too early-age digital for me) screams SUPERS.

Um... you need d4, d6, d8, d10, and d12. So no d20 on this bad boy. Plus you need a deck of Paragon cards. A PDF of the cards comes with the game so you can print them out. They're simple black line art so that's no biggie. The cards are like special effects, such as Lucky Break. That type stuff.

Oh man... there are 13 stats for a character. There's a max load table (lifting I guess?) with decimals. So those are not giving me a warm and fuzzy. There's a list of backgrounds and weaknesses, which feel like GURPS-style Adv/Disad. Which is totally fine, of course. It's an intuitive concept and I don't know why people shit on it sometimes.

There's a beefy list of mental disorders, which is a huge callback to classic RPGs that tried to model everything. And this game is definitely in that lineage. It wants to simulate everything it can so you can play any genre you like. Of course, from a game design nerd perspective, this is a fool's errand and no one should endeavor to do it. What you usually end up with is a textbookish set of all-things-being-equal rules that might fit well in an empty white playing space but is clunky and uninspiring when you try to use it in a genre or in a very person setting.

Not poo-pooing this game at all. It's a fleshed out labor of love. But generic systems are just not inspiring to me anymore and I don't believe they accomplish the task they want to accomplish, in the end. At least not for anyone other than the game designer and those few people who for some reason love the blank white space of such a game.

Hypertellurians by Frank "Mottokrosh" Reding is a sci-fantasy RPG... and I really really love me some sci-fantasy. It is a Creative Commons game, which is rad because you can make your own Hypertellurians content and put it out to the world.

The text says it is compatible (more or less) with most old or new adventure games. I'm not sure what that means since game mechanics are pretty disparate between games. But it does look like the game has six character classes or types, so maybe it's got some strong D&D DNA in it?

The text says that the rules use "natural language" so there's lots of room for interpretation, which is good. But also I can see that the characters have numbers rating stats. So it's a mix.

A big portion of the charsheet is inventory slots. One of the key principles of the game is that what you carry defines you. This is certainly a strong callback to old school D&D in which the thing that differentiates two level 1 fighters is that one has a club and the other has plate mail and a sword. Big difference. Also, games like Knave and Into the Odd certainly put a high premium on inventory. I'm also doing this to some degree in GOZR. Anyway, I like it.

I just flipped through and saw a power called Magnificent Mucus Membrane. That's a winner.

The game's art is a mix of custom art and what I think are old public domain sci-fi pieces that kick a lot of ass. The cover by Anna Katariana Molla is pretty sharp. I snagged a print copy of the game and it looks not too shabby. It's on the edge of being a little bit too desktop publishing for my taste, but it's pulled back just enough to be good.

The character sheet is fantastic. It's drawn, and there's a painted version. I can't see who the artist is, though. I might be stupid. But there is a Skullfungus version too! And we all love some Skullfungus.

In the Heart of the Sea by Goblin's Henchman is a one page dungeon. Or more accurately, it is a one page seafaring hexcrawl procedurual thingie. It's only one page. Henchie gives us three "hex flowers", which are big hexes with 19 smaller hexes inside. Each day you roll 2d6 and use the navigation directions hex flower to see which hex you end up in. Each hex has some kind of encounter or trouble or other event. It looks like a very simple, fast way to determine sea travel events if you end up on the high seas in a hexcrawl kind of campain. I'm gonna say neato!