While walking back to the village Quilliam studies the journal more closely.

In the village is a gathering of people arguing about preparations for a possible orc threat. The villagers have brought out various odd, magic items that seem to be randomly occurring in the area…talking dolls, singing spoons, and chairs that can fight. But the words of Blart and the event with Bjorn cause great concern among the heroes. These “magic items” are no good!

A bit of Miana Musina’s charm convinces many villagers that they need to go on a wide march around the village area, a ruse to get them out of the village in case all hell breaks loose.

The adventurers decide to investigate the island at the center of the lake, which seems to be at the heart of all this trouble. Suiting up with some snow shoes, oil, and other goodies they head out.

The island is oddly formed, as if it were growing up from the lake like some kind of frozen plant. Silverchain, who to this point has said little about her experiences in the Ice Forest, summons a spirit warrior…a powerful spear-wielding ghost hovering above the ice. Could this be clerical magic? Is Silverchain now a priestess of some ancient goddess?

The spirit warrior, being asked to guide them, reveals a 3’ diameter stone door under the ice at the island’s heart. Argus puts his mighty muscles behind it and opens the door to reveal a well-like tunnel leading straight down into darkness. Sparruu suggests tying ropes together and climbing down. He and Skat begin the process.

But before the team can begin the descent they become aware of approaching danger…8 lurching, hunched forms running at great speed across the icy lake. Bestial forms, all mouth and teeth and thick manes, dragging great maces and axes…running towards the island! Drokks, as Quilliam surmises. Savage mercenaries and assassins. No time for negotiations. The arrows fly and the battle is joined. Axe and mace, arrow and magic, furious combat! 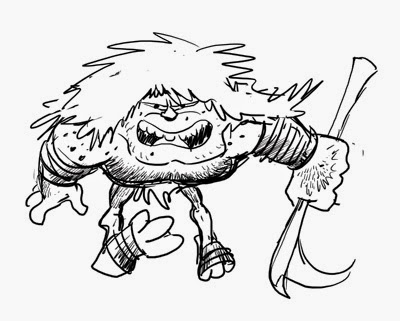 But these are no mere cyclopean orcs. The creatures are skilled at battle, quick, with thick, tough, furry hides and knotted muscles. And they hit hard. The barbarian takes several blows, nearly dropping from the onslaught. Seeing that the party’s chances of victory are slim, Sparruu suggest a retreat…down the hole.

And so he goes, followed by the others one-by-one as Argus tries to hold off the beasts in an apparent suicide mission. Quilliam pulls at Argus uselessly to get him to leap into the hole as he works his magic, creating a feather fall on the whole party.

Argus, seeing the means to retreat and the necessity, leaps in…slowed by the feather spell, pulling the lid onto the opening behind him. The entire group float peacefully down 150’ to a stony, cold floor in the darkness…