There are a number of reasons why a lot of people, myself included, have leaned hard into designing game stuff based on the classic D&D chassis. One of those reasons is familiarity. I already know beyond the shadow of a doubt what this basic chassis does so it's relatively easy to hack it and bolt on new stuff. It's good that way.

But not everyone is into that. Not everyone likes D&D. And of course we don't get shiny new games by rehashing the old one endlessly*. And even an OSR-lover like myself sometimes wants to climb out of that sandbox and play somewhere else.

Anyway, this post is about how hard it is for me to write game mechanics. I can come up with them all day long but my problem is settling on something. This is yet another reason I often lean into D&D so much. I don't have to obsess over as many choices if I just go with the classics. But right now I'm writing a new game, Dead Wizards, which I've talked about many times before. And it's hard. 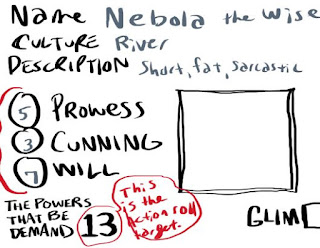 Here's the current struggle in a nutshell.

I'm having fun choosing and designing weapons because this setting will have a lot of fighting. I'm taking a cue from Chris McDowell's excellent Into the Odd by eliminating attack rolls prior to damage. You just roll damage, which is soaked by a defense (currently called AC... because this apple hasn't fallen far from the tree yet). So the roll is heavily informed by the weapon you're using in addition to your battle prowess. One PC might roll 1d6+x while another is rolling 2d4+x. Each player will know what to roll because it's in their weapon description.

But for all other actions, you just roll 2d6+attribute and the target is always 13. Simple, right?

And yet it bugs me that I have this "core mechanic" that is simple and well-known for everything except combat. This means combat is special, as it was in most older games. This is like nails on a chalkboard by modern standards, isn't it? (That's rhetorical, I know it is.)

So what's the solution? Some may say fuck combat being special, make everything the same. In some sense I realize this is good design because it is simpler and has fewer moving pieces. But I'm not designing a machine, I'm writing a game. The aesthetic is just as important as the function. And I want the weapon aesthetic to inform the combat mechanics. I am not a fan of games in which all weapons do the same damage, or everyone who is of this class does x damage. I want the weapons themselves to be integral components of play, not just window dressing. My choice to use a scimitar instead of a spear should have some kind of real impact beyond just description.

But I do not want a similar granularity for climbing walls and telling lies. I want most things to be simple, thus the 2d6+attribute vs. 13 target number. A huge part of me is ok with combat being a bit of a "sub-system". Maybe that's because I'm coming from an older age of gamers and I'm comfortable with this sort of thing. You young whipper-snappers and your ultra-light core mechanics just don't get it**.

I could sum up this entire post by saying that I'm designing a new game and I'm in the middle of making important mechanics choices that I wanted to talk about for a few minutes. Sharing is caring.

*Let me unpack that a bit. We absolutely do get cool, shiny new games even when we build them upon D&D (witness the glory of DCC RPG or the elegance of Into the Odd). It's just that we don't get as many new and innovative game mechanics and we risk failing to really crank a thing up to 11 because we're chained to some artifact of an older game. Case in point: Armor Class. I love AC and if I'm designing something that is the equivalent of AC, I wanna use that term. But maybe I'm limiting myself here. Maybe I should jettison that classic term and push into something else. Etc.

**Oh shit, I'm flashing back to making passionate arguments for descending AC. This is where my grognard nads dangle lowest.
Posted by James V. West at 9:07 AM