The RPG Folder Your Uncle Bert Stashed Under the Bed

This thing feels endless. But some goodies are lounging around in this forgotten hole. Also, I just noticed I'm going alphabetical because that's how the folder is defaulted. Too bad there's no "shuffle". But maybe I'll hit them randomly next time anyway.

No cover on this one, just a one-sheet list of d20 backgrounds for your D&D character. The mechanics are simple enough that I think they could easily work for nearly any version of the game, but certainly they will work flawlessly with OSR-friendly versions. And this is super fucking useful. I'm gonna put it in my gaming folder (like, a real folder that you hold in your hands) so I can whip it out next time I run a new game. It comes to us from the Zenopus Archives, a fantastic resource specifically based on the 1977 Holmes edition of D&D. 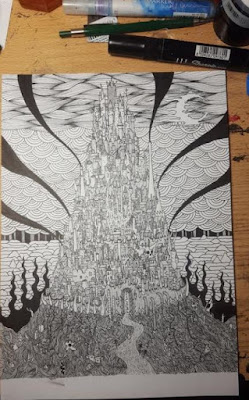 Bandits & Basilisks is a very short retroclone of OD&D by Albert Rakowski, another person I absolutely do not know. The game is only 7 pages or so and has no classes. I like that idea, no class. The text says you only have to roll for one thing: arcane lore. It's a percentile roll. But you also have to roll for surprise and, I guess, hit points and damage. But those ideas aren't fleshed out. I would say this is not just bare bones, it's barely bones. But if you already know how-to-OSR, and if you have this thing at your fingertips, I don't see why you couldn't run a good game with a few interesting little touches that aren't in most OSR games (such as that lore score or lack of classes). Also, Rakowski seems to be no slouch in the art department (see left). So why use public domain art on this PDF? I'm sure the answer is out there, probably on his blog.

I would use this for a small campaign in a very specific setting, perhaps in the classic 70s sci-fantasy vein.

Bastard Magic by D. G. Chapman, illustrated by Eleanor Bergmann, is a weird little book of hand
spells. Described as low level or cantrips, these spells may be possessed by any type of character. Each spell requires you to put a tattoo on that hand so that each person is limited to one spell per hand. Flippin' cool, huh?

I would use this in a dirty Lankhmar-style city and it would be knowledge held by a thieves' guild or something like that. I think that's a nasty good idea.
Posted by James V. West at 7:25 PM