When running Labyrinth Lord or B/X I like to allow players to choose one thing that is special about their new PC. This could be a special item, contact, spell, power, knowledge, or just about anything else they can dream up. I don't quantify the quality. We haggle over it. I have in mind the kind of limit I want. It should be something that I don't think would break my game. They tell me in words what they want and they make suggestions on how it should work, mechanically. I consider it, make any necessary tweaks to the mechanics, and roll with it.

This has a few awesome benefits. First, it gives players a really fast buy-in to their new PC. But it isn't oppressive. It doesn't require a backstory novella, just a single line or two about one thing. That single line or two gives me windows into the new PCs' world that I can use in building the campaign. And if one of them dies, so what? That tidbit of information that helped guide the campaign is still valid. It still stands. We don't have to abandon it because the character to which it was originally attached is no more. If there was a kingdom of rat people beneath the city before the PC died those rat people are still there.

Here are a couple of examples from the last campaign I ran. 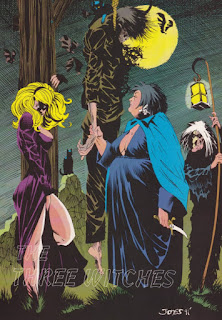 -A PC witch who as actually three witches. The Strange Sisters. The player's idea was that the sisters would always be holding hands and would act as one. So he still got one attack per round, casting one spell per round, moving at the normal rate, and so on. In fact, in hindsight the “benefit” didn't really confer any benefits. It was just cool. Like gaming with the three witches from DC comics.

Now, near the end of the campaign the Strange Sisters died. I believe they were crushed by a giant worm, if I remember. BUT... I decided that their trinity should have an impact and I tweaked things until it was revealed that one of the sisters – the eldest – lived. Sure, she was a bit flummoxed that that her sisters were gone but she was still around. With a catch... I didn't tell the player this at first, but the witch had essentially cheated death and was living on borrowed time. Each time she was hit with any attack from that moment forward she would have to save vs. Death or die.

-A PC with a weird luck power. I can't remember exactly how it worked. But basically he had a 50/50 chance of getting “lucky” in a given situation once per day. That allowed him to enact his luck power when he knew his chances were crap. It really didn't come up very often in the campaign, but it was cool. 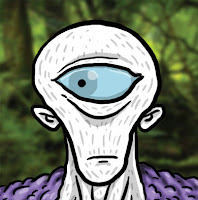 -A PC with a cloak of fireflies. Sort of. He was surrounded by glowing bugs that acted as a soft light and could potentially have some other benefits. Again, those didn't really come up very much. But they added ambiance.

Arguably, you could do things like the bug cloak as mere color and have no mechanical benefit from it. I could describe my elf PC as being razor thin and having glowing eyes... but that's not going to get me a Light spell.

But I like letting the players be creative and also granting them some minor benefits from it. Of course, the context of the campaign matters too. If its low fantasy then I would limit these special perks to mundane things. You gotta think contextually.