GOZR includes a meta-game system of GOOZ. GOOZ is luck points. Every game using luck points has its own name for the mechanic. Mörk Borg calls it Omens, DCC has the Luck ability, Top Secret had Fame and Fortune, modern D&D has Inspiration, etc. These are all different systems but the core idea of luck points is that it is a player’s resource, not embedded in the root mechanics of the game-story. Meaning this is a rule that is applied outside the story itself... thus a meta mechanic.

I love luck points. I have included them in every game design or campaign I’ve ran since probably 2008 or so. In my experience, this type of mechanic has been universally enjoyed by players. When I play a game that I’m not running, I always feel weirdly constrained if there is no luck point type of mechanic in use. For example, when playing classic D&D you have moments where your image of what's happening is epic but you roll a god damn 2. Ok, fine. It's a game. But if I have the option of expending a meta resource like a luck point and re-roll that die, I'm a much happier player. Even if I miss the second roll too. 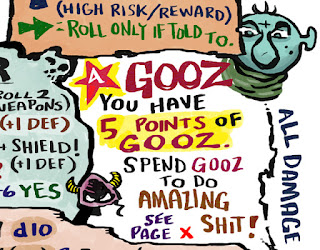 One of the coolest things about a luck point system is that you can have one that will literally work for any game. Very simple: You have 3 Luck Points. They replenish between adventures, sessions, or at whatever cadence makes sense for the game. You spend 1 to re-roll a die of your choice. That's it. Drop it on Runequest, Warhammer, D&D, Paranoia, Star Wars, or whatever you like. It's not enough to break anything but it is enough to give players a little knob to turn... which feels pretty good, actually.

Some common arguments against luck points:

This one is weird. Because luck points are necessarily meta - they are not embedded in the basic mechanics. They are a player-facing resource, not a character-facing resource. They exist on top of the normal rules. So the normal dice rolls, while they do of course have randomness and therefore you can "get lucky" are not at all the same damn thing.

This is just bullshit nonsense. It's a game. People carve out time to sit and have a fun time. Especially if its an adventure game where the player anticipates being heroic or awesome, then why on earth would a GM want to go out of their way to make that outcome less likely? Of course you don't have to add luck to your games, but actively opposing it could be a sign that you're being a dickhead if your rationale is "suck it up buttercup".

Not if you account for their use. If me being able to re-roll a few dice per session breaks your game then maybe its your game that has a problem. I dunno. Of course this depends on the game. I'm thinking of a fairly narrow style of gaming (adventure gaming). I'm sure there are types of games where, perhaps, only a few dice rolls are made at all and being able to re-roll them skews the results away from the intended experience. I can understand that.

When I designed GOZR’s GOOZ system I made decisions about the core game mechanics to lean them slightly toward the difficult/lethal side. GOOZ is on top of that, providing players with a potent way to skillfully and artfully avoid some of the pain that the system might bring. It’s a swingy system, which is why giving players a meta currency is important. The nasty assassin robot got initiative and might one-shot kill you? FUUUCK THAT. Spend a GOOZ to steal the initiative. But oops… you spent your last GOOZ a few minutes ago to do a wicked stunt. You might be fucked now.

But at least you had a god damn choice, right?

Jon Peterson has a great post about the history of luck mechanics here.