Follow up on posts I made about running a public campaign at a local brewery... 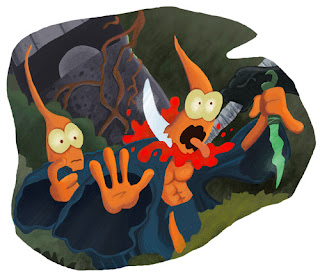 We are at least 4 sessions in and the rotating cast of PCs has managed to explore the bald mountain base of a weird alien race and has had multiple encounters with their owl bear soldiers. Next session will see them locked in combat with a host of owl bear guards on their final push to overtake the entire location and secure its treasures in the name of the Jade Prince.

Next session is this Wed.

Thoughts so far on public games:

They are necessarily lite. Without a dedicated core of players and a lot of time to play, it's very hard to develop depth. But this is D&D... and for my money I'd prefer to keep it lite. We can and do develop characterization over time. Some players come almost every game and play the same PCs, so that naturally leads to character development.

It is really cool to get to play with different people. I love the folks that always show up, of course. They are the core. But when I get a random new person I don't even know it's just a cool thing. Doing this is going to challenge my DMing skills to the fullest, I believe. At least in terms of organizing and orchestrating games in general.

So far so good.