Rabbits & Rangers is finished and in the hands of the best layout guy I know. So now I'm thinking about what to do next. And what's been rattling in my head for a while is something that captures my love of B/X and allows me to use a bunch of material I've got lying around. So maybe, just maybe, I'll do a B/X setting book like I talked about doing last year.

The setting I've been using as a default for a little while is the city of Old Gnarl. This is an ancient place full of corruption and evil and other good stuff and its a melting pot of races and cultures. So naturally it makes a good launching point for any good old fantasy campaign.

Players in my Monday game will recognize elements of this idea because it is the same setting in which I ran the Frimmsreach campaign in 2014. But in their case, they never actually explored beyond one small area of the frozen north so the city of Old Gnarl never came on the radar.

I'm always nervous about attempting to write setting material. I always feel hemmed in if I do a big map with lots of detail. It makes the world feel smaller. But at the same time a world without boundaries feels limitless and unfocused. A bit overwhelming. I think a good compromise is a zoom-in on a setting. Just show a city and stuff around it. Hint at what might be beyond the map's edge. But don't lock yourself in too much.

I don't know. This is all still up in the air. If I end up not doing it then this barbarian chick won't have a home. 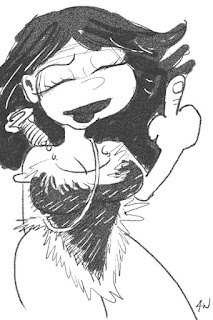