EDIT: The book is complete. The title is Supercalla. Go check it out! Now back to the older post...

I'm in the early stages of creating a Troika!-based sci-fantasy RPG. The working title has always been Zoa Space Fantasy, but that is subject to change. An alternate title I have on the table is Hellion Cross, which is the name of a specific sunrealm within the larger setting of the Coz.

Here are a couple of design choices I'm currently wrestling with.

1. Should this be a Troika! setting or a standalone RPG based on Troika!? My inclination is to make it standalone. My only reason for entertaining the idea of making it a setting is that it would be slightly easier to pull that off. Of course this game has precious few rules so really we're not talking about a huge amount of work to make it a standalone book. The benefit of going that direction is also that I can incorporate "house rules" directly into the actual rules. 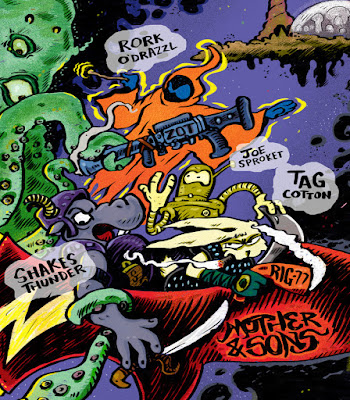 2. I had this notion that the Backgrounds would either be in 3 sets of 36 or 6 sets of 36. I feel like 6 sets is a little overkill. It would be fun to create that many, but maybe that would make choosing a Background a little harder. Rolling for it would be as easier either way.

3. How much of the setting is implied by the Backgrounds vs. explicitly described in other sections? What I love about Troika! is that the Backgrounds do in fact give you a sketch of a setting and that's really all you need in order to get a game going. From there it can go anywhere. So here the conceit of the world-builder comes into conflict with the game's very simple aesthetic. The more I enforce the crunchy details of this world the less room you have as a player to be playful and creative. I have always gravitated to things that give me more room to play and be creative, so why would I want to create something that hinders people?

What I'm leaning toward right now is to have the vast majority of the setting suggested within the Backgrounds and maybe give the broad setting an Isle of Dread-style treatment... brief little paragraphs describing the major concepts and places - information that would fit on a couple of pages at most.

Ultimately I'd like to make this a fairly visual book, saddle-stitched and in the realm of 48-64 pages. Probably in color, like a 70s comic art album. A thing that inspires role-playing more than directing it.
Posted by James V. West at 8:20 AM