I'm thinking about taking my collections of Labyrinth Lord detritus and transforming them into a monsters & treasures type book. I think I'll call it Labyrinth Lured because it's clever. Then later I might do one that's more saucy and naughty and call it Labyrinth Lurid. Because that's also clever in an annoying way.

Here's a mock up of what the cover for Labyrinth Lured might look like. Just imagine it in stunning 256 million range Technicolor™ for the full effect. Picture an interior chock full of nasty boogers and gaudy baubles. Maybe some of the LL character classes I've been far far too lazy to do for Black Pudding, such as the Dazzler and the Mentalist. 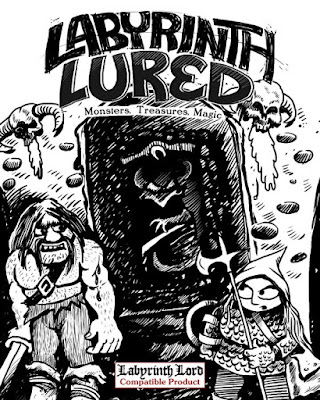