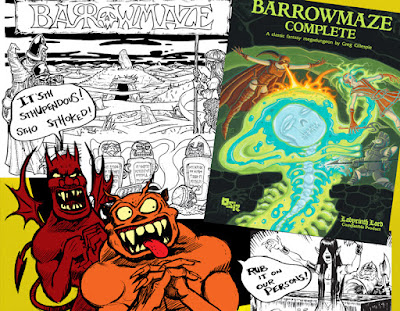 I picked up Greg Gillespie's Barrowmaze Complete a couple of years ago. I was instantly hooked. I ran a short campaign as soon as I could. It included a luchador and a necromancer and ended with a 50% TPK (in the town of Ironguard Motte, not the actual Barrowmaze). Very satisfying.

Barrowmaze is a megadungeon, which means it is mainly a big fat huge collection of rooms designed to kill you. But it's more. It's a sketched out, robust setting that actually works. It gives you all the essential information you need in order to get a game going very quickly. It doesn't include a lot of flair and additional information about the setting that isn't immediately useful. It's quite lean in that sense... but not spartan. It's got some style.

What I love about this book is how easy it is to use. If you are going to run a short adventure for a one night gig you can just flip through the various barrow mounds and find one with a few rooms. Then just concoct a reason for the PCs to be there. They are hired by a wizard to go to the mounds and uncover a specific tomb. Start the game right there at the tomb. Bob's your uncle. The fact that the mounds are not all connected to the bigger maze means you can do in and out adventures, exploring the mounds as quickly or slowly as you like. Eventually, the PCs will find the maze and you can sink your teeth into that monster for the long haul.

(The third time I used Barrowmaze the PCs managed to navigate directly to the primary maze entrance on the first session. I wanted them to poke around in some mounds first... but that's not what happened...)

The writing is tight and lean, allowing you to run the maze or the mounds on-the-fly without actually reading too much of it in advance.

This book costs a lot of dough. If you don't know Barrowmaze, you might see the price tag and say "nope". I totally understand. But the book is well worth the investment.

Oh, and if you like undead this will be like Disneyland for you. If you don't like undead and don't want to pay that much for a PDF or print book, maybe not so much.