The gretch is a monster that appeared in Black Pudding #1 in 2016. It is basically a thing that spontaneously appears from old candle and spell residue in a wizard's lab. I picture old wizard towers having at least a few gretches roaming around. Perhaps the wizard wasn't able to control them and they murdered them in their sleep?

Poking around in old documents I rescued from an old computer, I found what is certainly the first reference to the gretch, from 12/2007 or earlier:

Cir Lan – A wicked sorceress searching for the swords of the Old Kingdom to tap into their mystic powers and discover the great secrets of life. She uses winged gretches as familiars and always has a wild look in her dark-ringed eyes as if she were on speed.

I have never used a gretch in a game. I need to remedy that. 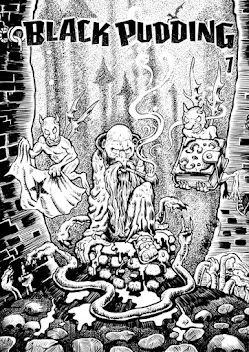