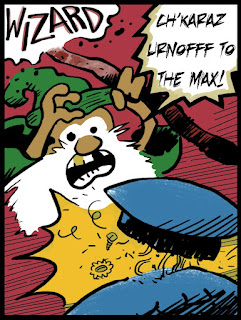 Old school Magic-Users have a tough row to hoe at low levels. The payoff is that when they gain higher levels nobody can fuck with them.
But here's a problem: Most players of D&D (especially classic editions) are playing low level characters almost all of the time. This is especially true for public games where the tendency is to run little dungeon romps for characters in the 1-5 level range.
Wizards in this range are fragile and can't do much. And anyone who argues that you can "still throw a dart" is a fool. Don't listen to them.
Make low level wizards better instead. It's the morally correct thing to do.
To that end, here are some ideas and thoughts I've had about old school MUs over the years on this blog.
In Read That Magic I kind of go off on a rant about using B/X rules as written and how it makes playing a first level wizard kind of lame. I still feel that way. If we assume most games are not going to get into higher levels, then you need to beef up them wizards. Don't be a tool.
In OSE and B/X Spellbooks I talk about three ways you can play B/X rules as written and work it into the fantasy fiction of your campaign. I like these ideas, though I'm prone to just house ruling the shit out of wizards instead.
In Magic-User with Sword I talk about allowing wizards to use weapons other than daggers and to wear armor. Because I detest the notion that they somehow just can't do it. Let your wizard pick up a sword, for crying out loud. They'll suck at using it.
NOTE: One thing I didn't address in that post was just how much emphasis B/X puts on magic swords and just how much benefit that is to the Fighter class. If the wizard can also use a vorpal sword or +3 sword or whatever, then the Fighter's niche is threatened. I get that. And I'm actually OK with the caveat that magic swords want to be used by warriors, not wizards. So a +3 blood drinking sword might simply refuse to function in the hands of a wizard. It's magic, after all.
In B/X Wizard I present a Wizard class for B/X. This was used in my Isles of Rone game and worked quite well, though we only played at level 3. It's actually a little bit more fiddly than I prefer in a B/X class, but perhaps not over the top. It includes the use of other weapons and armor, brewing potions, using both M-U and Cleric spells (I tend not to want Clerics in my games), allows and emphasizes magical research from level 1 forward, and grants the PC one special item.
If I revised this class today I'd do it a little bit differently. I'd open up the Wizard's ability to create magic stuff, including potions, but I'd tie such efforts to time and money more explicitly. It should be no big deal for a Wizard to brew a potion if given a few days to work on it. But of course you don't want the power gamer to convert the 30 days of downtime since the last adventure into 15 potions. But you also don't want overly persnickety potion brewing rules (I still love keeping B/X classes to a single sheet of paper, if I can).
Another idea I'm noodling is to only have 4 house rules for Wizards.
1. You can brew potions, make magic items, and conduct magical research from level 1.
2. You get 2 extra level 1 spell slots from level 1.
3. You can use any weapon but you can't have it ready and also cast a spell and it takes a round to get it out or put it up.
4. You can wear armor, but you have to make a save vs. Spells in order to cast and the armor's AC benefit is a penalty to your save.
Just some thoughts.
Posted by James V. West at 3:12 PM