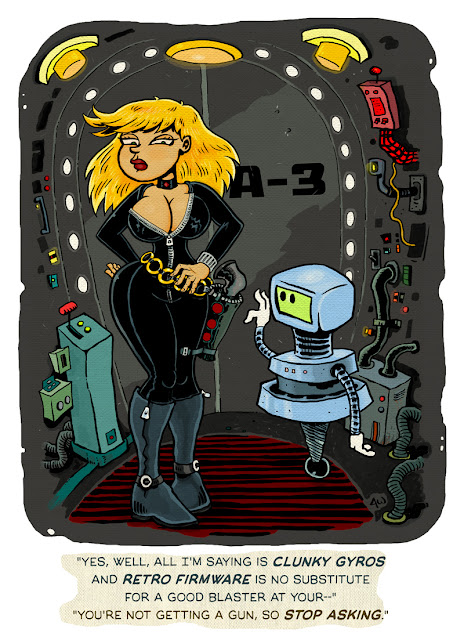 Here's one I did recently. I have posted it on FB and Insta but I keep forgetting to mention that it's actually a finished version of a very old sketch, posted below. Not that it matters to anyone but me. But there it is.

This is sort of in the wheelhouse of old school "men's magazine" style pinup cartoons wherein you draw a sexy lady and have some kind of pithy, funny gag written at the bottom. Just for giggles.

This was OK. I like the image fine, but it isn't thrilling me. Might just be that the composition is static. I have a bad habit of doing static figures when I really kinda want to do more dynamic scenes. And I don't mean action scenes, necessarily. You know how Frank Frazetta or Mike Ploog can have a figure just standing around and the image have movement and action? Like that. Things in motion, even when the figure isn't leaping or fighting or running. I feel stiff.

Another thing I was conscious of when drawing this was faces. A lot of artists have developed such a style that their faces are immediately recognizable. In some cases its because they seem to draw literally the same face on every figure (maybe Dan DeDcarlo comes to mind)*, or it's because their line quality and general style just shines through even though they draw a wild variety of figures (maybe Dave Cooper). So what are my faces like? I went through a phase between 2008 and 2012 where I was drawing a lot of huge eyes and cartoony faces. Which is good... I like cartoony. But I was being influenced by art that I didn't necessarily love and I backed away from that just a little bit. And it just strikes me now that I don't have "a face" that I draw. For example, I draw different noses all the time and I don't know if that's a problem or not.


*Now, I'm not suggesting that artists who draw the same girl over and over in different clothes is bad. It isn't bad. It's fine. Dan DeCarlo drew amazing girls who all looked alike. I have zero complaints about that. Hell, lots of cartoonists draw exactly the same face on almost every character for decades. Whatever works.
Posted by James V. West at 7:00 AM