But Robots Are Not Human 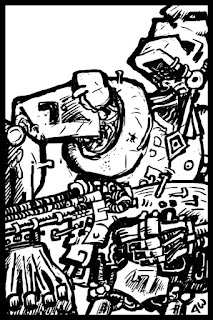 Robots are people. Robots are not human. These are the first premises of My Metal Skull, an RPG about robots.

Robots are people because that's the only way you can have character. And character is essential to an RPG. I can't imagine an RPG in which I slip into the role of an object that has no character. But all of that is kind of moot because we're all people and no matter how hard we try, we cannot possibly "play a role" that isn't a character. So robots are people. 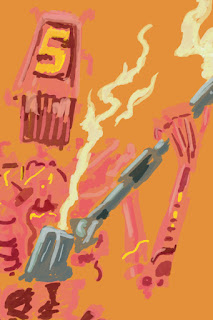 But robots are not human. So it's OK if they act kinda funny. Kinda weird. Kinda odd. They are not human. They're gonna have quirks that we humans don't get. Especially after we humans go extinct and the robots continue on, evolving in their own ways over long stretches of time. This game takes place in an uncanny valley epoch where robots are becoming their own species, for lack of a better word, but are still fundamentally the playthings of humanity. Their behavior is going to be all over the map.

And it's those two ideas that I find most interesting about this project. Both in the process of drawing robots and in designing a game about them, I find it fascinating that robots are people and are not human. I hope the game speaks to that concept in an adequate way.