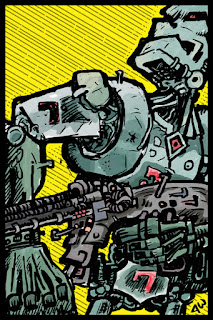 As is my wont, I suddenly had a fixation on a thing in recent days and that fixation is only growing. You may have noted my many posts in the pinup art vein, a fixation I've had since I was 20 years old. That's not new or sudden, that's just me.

But now robots. Why robots? You know, I didn't even like the animated movie Robots. I can't remember why, exactly, but it felt disjointed and ungrounded to me. Or it was just too generic. I don't know. I didn't even love all the robot stuff in it.

But I love me some god damned robots. And I've been drawing a lot of them lately. I think the impetus was that I can just start drawing a robot straight to inks without a sketch. I mean... who's going to call me out on bad anatomy? It's a damn robot. Show me the correct anatomy.

Drawing robots is like drawing monsters. You can invent as you go and it's a brilliant, freeing experience. So I'm continuing to draw them daily. And of course, naturally, I'm noodling an RPG out of it.

I haven't made much progress on the RPG. I don't have a plan. I just have some notions. 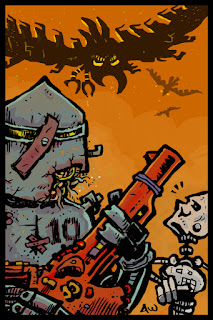 Working title of the game: My Metal Skull

I flirted with My Metal Head, but the ubiquitous nature of "metalhead" signifying heavy metal music didn't mesh with my concept. I mean, I am a metalhead... but the game isn't going to be metal in that sense. It needs to be more fluid than that, not quite so locked-in to such a specific cultural aesthetic.

1. Like, this is a game about being given an identity (you were built, after all) and then having the autonomy to change and grow into your own robot. So it should have elements of random character creation along with choices (point buys, maybe). But the real meat of it is the way you evolve through play. No levels or anything like that. You just change organically. You find modules you can add to your body, or you lose them. And the catch is that adding a module alters you fundamentally. So you have to constantly make decisions about what kind of robot you are and what kind of robot you want to be.

2, It is RPG adventure. So there's a focus on danger, exploration, etc. But also it's got to have a strong social component. These are robots without living human masters. They are trying to figure themselves out. You need social mechanics. 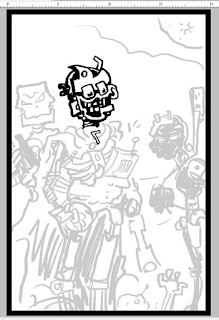 3. Weights. I don't usually give a damn about encumbrance. But here I'm leaning into it. Your body will be composed of various elements (chassis, CPU, modules) and each will have a weight given in kilograms. You'll have to keep up with that stuff a little bit because you're a robot and knowing your physical parameters is important.

4. Lots of cool modules. Like skills, spells, magic items, etc. The modules you can acquire or build speak to who you are and certainly what you can do. So these are important and I want to have a ton of them pre-written with nice clean rules for making your own.

5. Setting. All I know right now is that humans are gone. So it's "post-apoc" in that sense. But I don't want to call this a post-apoc game or make too much of the fact that people are gone. People had their time and that time is over. Now it's robots' time. I'll lean into the fact that robots can trace their origin to people and thus "humanity" is something perhaps many robots seek to emulate. Also, I'll lean into the far-future nature of the setting and have some funky cool evolutionary stuff with wildlife and with wild tech. I have not decided if this will be space-faring yet. It kinda makes sense to make it space-faring. But it's "hard" sci-fi at least in the sense that there's no FTL drives. So the robots may tool around the solar system, making the setting the solar system and not just Earth.

6. Some have asked if this will be a Troika!-based follow-up to Supercalla. I certainly have had that Troika! that make it less ideal for this project, as much as I love that game. So no, this will not be a Supercalla expansion**.


*I was noticing recently that "beats" is a term used by various people when talking about their RPG projects. I found that interesting because it's a thing I've used in my private journals for decades. When would noodle a comic idea I'd write down "five beats" about the comic and then riff from there.

**I say that, but I'm in the earliest possible stage of development. Everything could change tomorrow.
Posted by James V. West at 10:05 AM