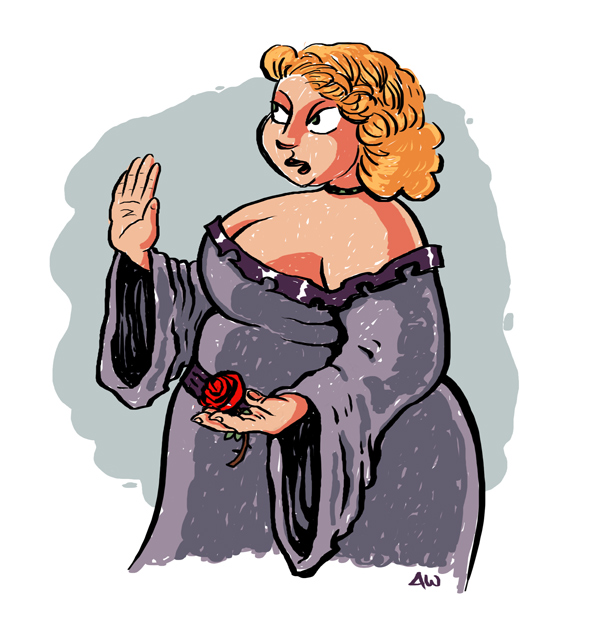 Another in a series of pinup style art. Here I question the term "pinup" only to the extent that there's nothing parciuarly salacious here. I'm not making a Playboy Magazine joke. It's just a drawing of a woman in a dress (I called her "Purple Girl" for some reason... is that a purple dress? Not really.). Sure, there's cleavage. And she's hot. But y'know...

So here's the thing about this one (and this one). I want to draw more like this. And I'm not just talking about "fat chicks"*. I'm talking about drawing people that aren't constrained by social expectations of beauty. Which is, in my opinion, about 99% of everyone you have ever met in your life. Seriously, when was the last time you knew someone personally who looked like the average person on a TV show? Television and movies skew our perceptions, they lie to us about what people are really like. Sure, there are nods to diversity of appearance beyond the diversity of race and sex and gender. There are the token fat chicks, for example, who almost always play the role of best friend or helper. But where are the cool as fuck fantasy action movies wherein the actual protagonist is a fat chick, fat man, someone with a huge nose, a person with an overbite, or just someone who looks like they came from someplace other than a Hollywood casting call?

People are beautiful. I mean, people are bastards, but they are also beautiful. Flaws are not ugly, fat is not ugly, moles are not ugly. I actually have a hard time just sitting and watching any TV shows because if feels like the equivalent of listening to an over-produced metal album with all the rough edges smoothed out. I hate that shit. Give me something real, even in my fantasy.

The root of all this is pretty simple, though. Men (I can't speak to the experience of women) love to look. And when we look, we judge. We are either attracted to a woman or we are not or it is somewhere in between. Then two important things happen that causes the whole god damn problem. First, we assume that the job of the object we look upon is to please our senses. When a woman is in a role that isn't inherently meant to be sexy, such as the frumpy fry cook or busybody, then we don't have much to say about her appearance. But in other roles, especially love interests, we have a LOT to say. And that brings us to the second problem: social expectations. Advertising, TV (which is advertising), Movies (which is advertising), etc, all inform what we collectively learn about beauty. We are told that Gwyneth Paltrow is one of the most beautiful women in the world. OK. She's a pretty lady, but not my cup of tea. So I don't crush on her. Go back a few years and maybe I'm younger and the woman is Cindy Crawford. I have no problem with Cindy, but I don't find her attractive at all. But if I said that in front of a bunch of guy buds I'd get flack for it. I'd be the odd man out. I'd be the butt of the joke. EVERYONE loves Cindy because she's the ideal form.

Fuck the ideal form. Fuck the commercials. Give me real or fuck off.

So... ranting aside... I want to try to keep this in mind much more explicitly when I'm drawing. I want to draw what I want and I want to be fearless about it. It's hard, though. That judgmental eye feels like it's always upon me. If it's not the eye of the twat who thinks fat = ugly, then it's the eye of the prude who thinks the boobs are too big. Fuck 'em.

I wanna be more like Dave Cooper. I don't know the guy at all, I have no idea if he's a total dickhead or a saint. But he god damn well draws what he wants.

*I use the term "fat" often when describing the characters I draw who are not skinny. I don't see a problem with that because I don't stigmatize the word. "Fat" isn't code for "ugly" in my world and it makes me sick to my stomach when I hear people use it that way. For example, I get physically uncomfortable when watching movies in which fat = ugly. It pisses me off. It's the dumbest shit in the world and it reduces human beings to nothing... including the men who weaponize the word. So stop fucking doing it, asshole.
Posted by James V. West at 12:00 PM