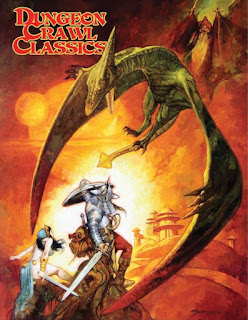 During the old 'Rona, I started running a new DCC RPG campaign for a few family and friends via Skype. This is maybe the fourth DCC campaign I've ran (?). Anyway... this game always brings out the "let's just roll with it" in me. I don't do a lot of planning. I allow myself to grab any ole thing that looks like fun and toss it into the mix. I have never written a DCC-based book, so I never think about it as a playtest.

This time I started with one of the dungeons from Black Pudding #1, replacing the stinking nobberlochs with hideous mutant spiders. The tomb was hidden in the sand until the zero-levels dug it up, acting against their will as slaves to the tyrannical Mad King of Zyrrum. I grabbed an old, unused map I drew years ago and plopped it down as the known world for the campaign. Zyrrum is the southernmost city, on the edge of a great desert. The PCs, slaves, won their freedom in the funnel.

Next up they set spent a year apart and came back together as level one PCs in order to rid themselves of the Mad King's slave mark. This mark, magical in nature, is very hard to remove. The PCs have discovered that they must embark on a quest to find the Lost Treasure Vaults of Zadabad in order to find the phylacteries of the Mad King and destroy him, giving them their final freedom.

So far they have spent most of their time in Zyrrum hitting up the local sages and sorcerers to learn all this information. It has been fun. Some heads have been busted.

Notably, one of the players is new to RPGs. This is his first game. So imagine my surprise when, in the first combat as a level one warrior, he fucking died. Like, instantly. Brutally. I rolled two natural 20s against him as the PCs were ambushed in an alley by men trying to capture and return escaped slaves. I gave him a Luck check to survive, which he failed.

But hey... death is not the only way to have a good time. It's DCC. The PCs were whispered to by an old witch in a nearby hovel (this was the sage and seer district). They were instructed to bring in their dead friend, which they decided to do.

The witch used wicked magic to bring him back to life. I gave him another Luck check, which he failed again. This meant the witch had complete control over his soul. She could end his life at her will. She controlled him. So she set him and his allies on a task. "Go and slay the master of the Red Brick Tower... so that my soul can be freed!"

Needless to say they hiked it on over the two day foot journey to the Red Brick Tower, killed a couple of man-bats, and defeated a mad, crazy old wizard who kept shards of his soul in various statues... one of which was an old witch.

Now the PCs have boarded the Soulcatcher on the river and are headed out to sea to find the location of the Rod of the Crescent Moon and, ultimately, the key to freeing themselves of their slaver marks.

I used a Dyson Logos map for the Red Brick Tower and for the life of me I cannot find the original link. So go to Dyson's blog and check out about a zillion awesome maps.