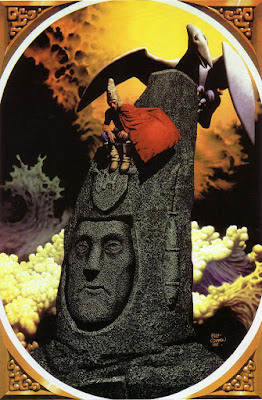 Like many people, I probably laid eyes on Richard Corben's work for the first time on the album cover of Meatloaf's Bat Out of Hell. Epic pic for sure. Left an impression, kind of like David Fairbrother Roe's unforgettable cover for Nazareth's Hair of the Dog.

(Ahhh... what happened to great album cover art? Like so many book genres, I suppose the switch to digital and the need for clear thumbnails has lead to a decline in cover art and a rise in simple design. I'll proudly wear my grognard suit on this one and say I miss great covers on books, music, etc. These days it's just a bit of graphic design with huge letters. Then again, I haven't really LOOKED at album art in a while. Maybe I'm wrong? Tune in to the end of this post for the answer.)

Richard Corben's art is weird. It's in that category with Frazetta and Vallejo (two artists I do not consider to be equals, sorry Boris but you're often boring) as sort of "epic" and "fantastic" but also it's underground. Richard Corben was a comix artist, after all, and he liked to draw tits and schlongs on his characters. His figures were also in the "I just stepped out of the gym and boy am I ripped" category, while also being in the "I'm big and soft and round" category. His proportions were strange while not being exactly wrong. And that inspired me. I have said many times how much I despise things that are too clean, trim, and polished. Corben's art, even when it has a careful polish on the surface, is never perfect. And I love that.

I keep saying things about Corben in the past-sense, as if his life is over. But he went on to achieve great things in the 2000s, doing Hellboy arcs and being inducted into various halls of fame. He is one of those great artists, like Vaughn Bode, who achieved greatness but not flatness. He was never a household name. They say Rush is a band's band. Richard Corben is an artist's artist. 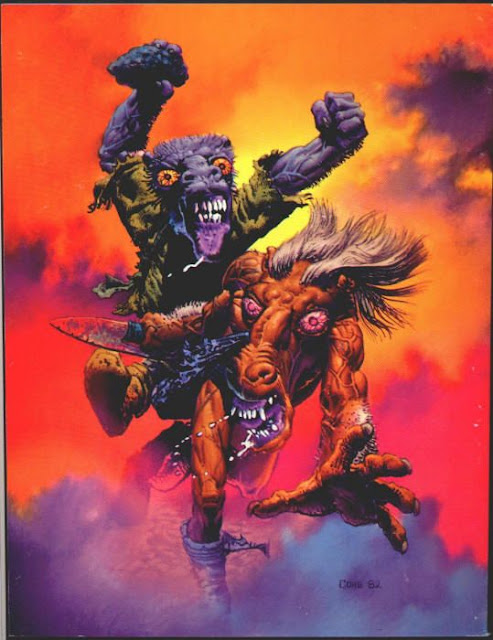 Well, I did some Google-fu on recent album covers. What I found was that things haven't changed so much. Most of the pop type stuff or hip-hop is a face shot or body shot of the artist with the title. Kind of normal. Metal album covers are same as always... lots of epic themes, Satan, sci-fi landscapes, etc. So not much has changed. I suppose it's mainly the book market, particularly fantasy, sci-fi, and horror, that has changed in response to digital books. You need a clear thumbnail for your e-reader so you can see the author and title on a screen of a dozen books. That's the function that a book's spine used to serve on the bookshelf. Then you'd pull it out and see the awesome cover art. There's a lacking of awesome cover art in books right now. /rant
Posted by James V. West at 8:05 AM