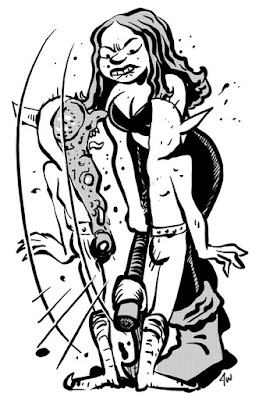 The topic of weapon damage comes up from time-to-time in OSR discussions. I think this is because we want that beefy fighter to be so very deadly with big-ass swords and we want that wee dagger to be more lethal than it is.

A lot of folks are in favor of straight 1d6 damage per weapon, as it was in OD&D. I hate that idea, but I get it. It means that the dagger is a better choice than it normally is and it allows players to be creative with their weapon choices since there's no mechanical penalty for those choices. But it also means - since all things really are even - weapon choice is virtually meaningless in terms of mechanics. Your skull-tipped mace and my super sharp scimitar both act identically in combat. I dislike this immensely.

Caveat: (Important caveat, no less) A good DM and player rapport will cause the nature of a PC's weapon to enhance play. My choice of a scimitar vs. your skull mace may mean that the Arabic-inspired setting has more respect/acceptance of my PC vs. yours. Perhaps your wicked weapon invites trouble everywhere you go while I can pass through markets and tea houses without excess trouble. Or let's say you choose a straight arming sword while I choose a staff tipped with 3 chains securing large iron hooks. A good DM would allow me to hook-and-pull targets on a good hit roll, but may also hit me with penalties when fighting in tight spaces. Meanwhile, your simple sword presents no particular advantages or penalties.

So yeah. Straight 1d6 can work as long as the group really embraces the narrative elements of weapon choice. I still don't love it, but I'm open to it.

Another idea is damage by class. My ideas below are in this vein, but I'm not a huge fan of the versions of this idea I have seen before because they never seem to leave the existing variable damage as-is for the "middle classes" such as Thief and Cleric. Versions I can remember seeing will apply something like a small-medium-large weapon category scheme and a die step for each based on class. I think this is perfectly logical but also kind of bland. To me, it robs weapons of their character.

Some people even go as far as limiting the Strength modifier in combat to only fighter types. I get that too, but I hate it.

I'm a B/X guy through-and-through because of the versatility of basic rules such as variable weapon damage (an optional rule but let's be honest... almost everyone uses it) and the universal ability modifiers. It means I can play a B/X Magic-User who has an 18 Strength and I can be potentially a better fighter than the party's actual Fighter - at least at very low levels. This bugs a lot of people because of class niches and what-not. I get that too. But I don't care. It lends greater diversity to characters in a game with precious few built-in bells-and-whistles.

Think of that B/X Thief who got lucky with a high Str, Dex, and Con. Give that guy a two-handed sword and you got yourself a bona fide sword-and-sorcery hero.

So yeah. Ideas. There are others too.

Here's a couple of ideas I had that I might drop into my next B/X game (maybe not both). These might have already been dreamed up by some other game nerd so please post a link if you have seen either of them before. That would be awesome. I certainly have not read all the reams of blog posts out there in the OSR-o-sphere.

For general use, not necessarily specific to B/X, it would be like this:

Race would probably be irrelevant since race in 1e or Advanced style games confers somewhat less advantage/disadvantage (or should) than in B/X where the class and race are the same.

Some classes get damage bonuses as they level up.

So Idea #1 I really dig because it doesn't mess with the existing damage values for weapons nor does it require new categories to be graphed on. You just have to go a die step up or down depending on class. It makes the dagger more serious for warriors and the sword less effective for wizards.

(I do allow wizards to use any weapon because it's fantasy. The downside is their to hit rolls suck and maybe I make them spend a round drawing or sheathing because of lack of expertise.)

Idea #2 seems like it would also go a long way toward addressing a big problem. Why is it that my level 1 fighter deals exactly the same damage as my level 9 fighter with the same weapon? It just doesn't FEEL right. It's heroic fantasy... I want to FEEL like I'm just god damn better at this shit than I used to be. So a fat +9 to damage with that dagger I picked up on the battlefield would do the trick. I dunno... I'm sure there are downsides but not sure the downsides outweigh the asskickery.