In one of the last Rabbits & Rangers games I ran, the PCs went up against Count Drake-Yulla in his forbidding haunted castle. They never encountered his arch-rival, Droono Duckshar the Fowl Wizard! 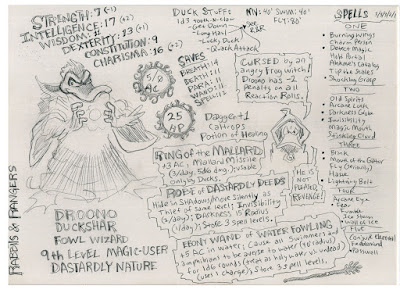 This was a random thing I drew last night. I am in the midst of a bit of creative blockage so anything I manage to put down on paper (digitally or otherwise) is a boost to my confidence.

This was interesting because the entire time I doodled it I was pondering the direction of the game. As it stands, R&R is a perfectly fine Labyrinth Lord supplement. You can see that I referenced several things from the book on this sheet. But the ultimate question I've been asking since the book came out is what is R&R going to be in the future? Is it a LL supplement or a game of its own? If a game of its own, then I have no reason to stick with pure D&D rules. I've posted many times about this topic. I have written lots of versions of the game that are not D&D-based. But something keeps me tethered to the old rules. It's as if R&R was always meant to be funny animals in dungeons... so why would I use alternate rules? I have no high-and-lofty theme in mind beyond funny animals with swords. I could write this as a standalone game with an original rule set, going the way of Ironclaw or The World Tree. And that would be fine, except I feel like anyone playing it will simply say "this is just D&D with different rules".

And yet there are plenty of people who will look at the current R&R and say "this is just more D&D stuff... with goofy talking frogs."

You can't please 'em all.

When I think about it and let my hair down, this whole thing can be summed up in a simple equation: